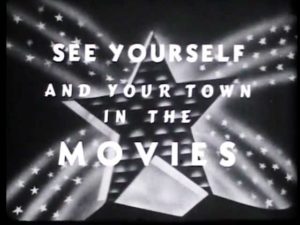 In the popular imagination, motion picture producers and camera operators are always assumed to be men. Even the cover of my book, Main Street Movies: The History of the Local Film in the United States, is indebted to this image of the “man with a movie camera,”  (apologies to Vertov). Even now, we can more easily imagine cameramen than camerawomen. The appearance of a woman behind the camera is still seen as a bit of a novelty. 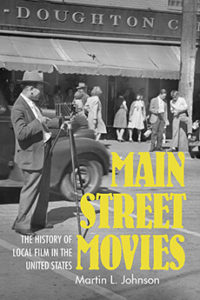 And yet, in the 1930s, when H. Lee Waters, who’s depicted on the cover of my book, is making his “Movies of Local People” in the mid-Atlantic, there were dozens of women filmmakers and film producers working in the U.S., collectively producing many, perhaps even a majority, of the local films made in that period. Today, I want to focus on one of the most prolific producers of local films, Amateur Service Productions, and the women who worked for the company.

Despite years of research, I’ve not been able to learn who started Amateur Service Productions, but by the late 1930s they seemed to have offices throughout the midwest, including Akron, Ohio; Lancaster, Pennsylvania; Jefferson City, Missouri; Waco, Texas; Oneida County, Wisconsin; and many other places. The women who worked for the company almost certainly began their employment by answering ads like this one, which ran in small-town newspapers throughout the country: 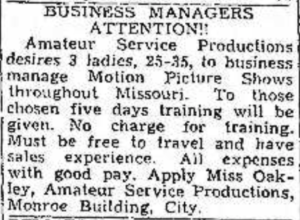 By looking through the census records on Ancestry, I’ve been able to learn a bit about some of the women who answered these ads. Several were divorced,  or widowed. Others were living in hotels, or in boarding houses, reporting long hours, and low pay.

When they arrived to town, they were almost always identified in the local paper as “Miss,” perhaps to disguise the complications of their own lives. (Most were also older than the age requirements specified in the classified ad). 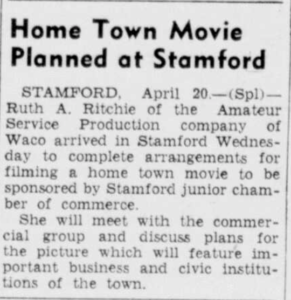 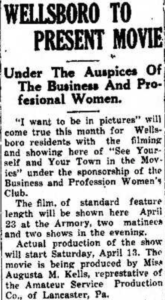 As advance staff, these women were responsible for selling the film to the town, convincing local businesses to pay for advertising, contracting with a movie theater or fraternal hall to host the screening. While Amateur Service Productions often used male camera operators, in many cases the cameraman was the only man involved in the film’s production. Women arranged for the production of the film, convinced businesses to sponsor it, and likely made up the majority of the audience as well.

While many of the films made by Amateur Service Productions survive, I have not come across any materials from the women who made them. In my filmography (in the book and, soon, I hope, online) I list several dozen films I’ve been able to document in local newspapers and archives. One company representative suggested that they made 1,500 films, so there’s many more to be discovered.

For now, though, I want to focus not on the films themselves, but the women who made them. Here is a partial list. By my count, women made up approximately 80 percent of Amateur Service Productions’s employees, both at the home office, and on the road, persuading local women to sponsor their very own picture: 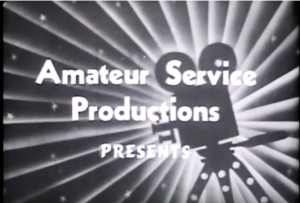 When the Academy of Motion Picture Arts and Sciences hands out its golden statuettes this Sunday, television viewers and tweeters will be reminded once again that, for all of its global reach, Hollywood is still a small town, with just over 8,000 Academy members choosing which of their friends and neighbors will be lauded this year. Like other awards shows, the Academy Awards gives the movie industry a chance to put its best foot forward, which often means that it presents its latest stars, from Lady Bird’s Saoirse Ronan to Get Out’s Daniel Kaluuya, as proof that Hollywood is a place where anyone can become a star.

But Hollywood wasn’t always Hollywood, and the people who appeared in movies weren’t always movie stars. One of the first things one learns in film history classes is that the American cinemagot its start in Thomas Edison’s studios in New Jersey, not on a lot in California. Early films traded on the strength of the production company’s brand, not the names of its actors.   The industry’s westward migration didn’t even start until the movies were a well-established popular amusement. As late as 1909, it was so unusual to see a moving picture camera on the streets of Los Angeles that a report of the production of a film made front page news. [1] In fact, when people did see a movie camera in town they didn’t assume someone was in from out of town to make a feature film. Instead, they thought it was just another local film, a common exhibitor stunt in which someone set up a camera outside their theater, filmed a few hundred feet, and then showed the results that night so the audience could “see yourself as others see you.”

As the Los Angeles Herald correctly prophesied, the local films made that March night were the first of many motion pictures to be made in the city. But even as the industry gathered strength in the 1910s and 1920s, with the major Hollywood studios producing 95 percent of all feature films in the United States by 1930, many small towns continued to be visited by traveling filmmakers who claimed they could bring a touch of Hollywood magic to one’s hometown. In my book, Main Street Movies: The History of the Local Film in the United States, I trace the long history of local film production in the United States. From town booster films in the 1910s to movies that imitate, mock, and celebrate Hollywood in the 1930s, these local films were rare opportunities for people to get in the movies even if they were thousands of miles away from Hollywood.

The Los Angeles Herald was just one of hundreds of newspapers that prophesized that their town would become attractive for moviemakers. Filmmakers told star-struck Chambers of Commerce that a film would help their town realize its full potential, attracting new residents and investors who had previously overlooked its charms.  Other filmmakers made their promises to would-be movie actors instead, holding contests in which the winners got to appear on screen, surely the first step to Hollywood. Some theater owners even got in the game, turning every house fire, military drill, and train accident into a central plot development in their next motion picture. Even if their hopes of fame were not realized, the people who appeared in local films relished the chance to dream as they saw themselves in their hometown theater. While there would be only one Hollywood, the people who thought their town’s film offered a chance to make them a star kept going to their local movie theater, secure knowing that they too once had their moment on the silver screen. 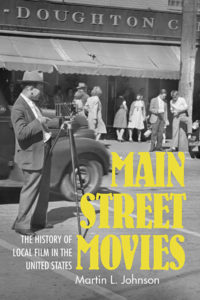